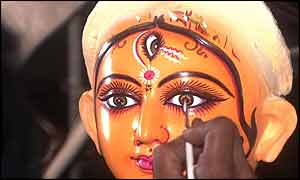 Preparations for the Durga Puja
By the BBC’s Kamal AhmedThe Bangladeshi Government says it has taken all necessary steps to ensure the safety and security of the country’s Hindu minority during next week’s religious festival, the Durga Puja.

The assurances come amid reports of widespread violence against Hindus following the 1 October election in which the four-party alliance led by Prime Minister Khaleda Zia came into power.

The Durga Puja is the biggest annual religious festival of Bengali-speaking Hindus.

Many Hindu leaders in Bangladesh have said that there will be no celebrations this year during the festival.

Instead they will hold protest rallies throughout the country saying they were harassed and prevented them from casting votes during the election.

About ten per cent of Bangladesh’s 130 million population are Hindus.

Christians and Buddhists constitute less than two per cent of the population.

Although Bangladesh was founded as a secular republic in 1971, a new provision was added in the country’s constitution by the former military ruler General Ershad in the 1980s in which Islam has been declared as state religion.

However, this new provision did not affect the status of the minorities and the constitution does not allow any discrimination against anyone irrespective of their religion, cast or creed.

But allegations of discrimination against the minorities are not something unheard of in Bangladesh.

At least in two occasions, one in 1990 and the other in 1992, riots broke out in different parts of the country following reports of attacks on Muslims in India and the demolition of the Babri Mosque in Ayodhya in northern India.

Huge damages to the properties and businesses belonging to Hindus were reported during those disturbances, but no human life was lost.

Allegations of intimidation of Hindu voters and revenge attacks following elections were also reported during the last two general elections in 1991 and 1996.

But this year reports of such attacks were more widespread.

Hindus are generally perceived as supporters of the Awami League of former Prime Minister Sheikh Hasina.

Awami League leaders say there had been wider expectations of larger support from the minority community following legal reforms which allowed them to get back some of their properties confiscated during the war of independence in 1971.

Those properties were classified as ‘enemy property’.

Many observers say that it is the Awami League which makes the minorities more vulnerable to revenge attacks by making claims of having wholesale support of the minorities.

Ministers of the newly elected government say that these reports of widespread attacks are exaggerated and a propaganda ploy of their opponents to tarnish the image of the new government.

Some newspapers say that in many cases attacks on minorities have been carried out by criminals with no political links.

And in some cases they say supporters of the losing party, the Awami League, have been implicated in the attacks.

A recent report on international human rights by the US State Department noted that in Bangladesh both opposition and ruling parties routinely use actual or threatened violence to achieve political ends.

Among the religious minorities, the worst victims of violence are known as Ahmadyias, a sect of Muslims whom many mainstream Muslims consider heretical.

At least six members of Ahamadiya community were killed last year in an explosion at a mosque during prayer.