Bangladesh has been shadowed by multiple episodes of communal violence since last week. Minorities, particularly Hindus, have been targeted since 1971. 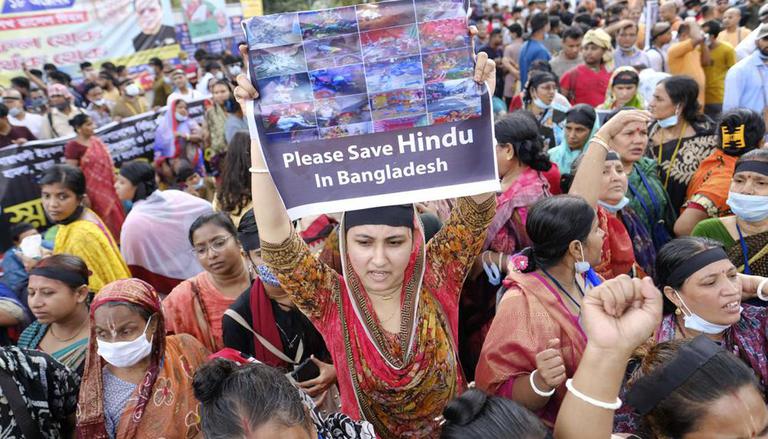 Bangladesh has been shadowed by multiple episodes of communal violence since last week. While persecution of minorities, particularly Hindus, have been occurring in the country since its formation in 1971, recent violence has rekindled fears in the hearts of hundreds of thousands of residents. Notably, Hindus constitute roughly nine per cent of Bangladesh’s total population of over 170 million.

Earlier on Wednesday, footage of the Quran being placed at the foot of Goddess Durga in Cumilla emerged online. The clip triggered members of the Muslim community to take out processions calling out the desecration of their holy text. Soon violence broke out in the region with people vandalising multiple pandals and attacking Hindus.

Aino Salish Kendra (ASK), a Bangladeshi human rights organization estimates over 3,600 attacks targeting Hindus have taken place in Bangladesh since 2013. In 2001, after BNP leader Khaleda Zia was reappointed as the country’s Prime Minister, her supporters unleashed a campaign of violence against Hindus. A later probe by Bangladesh’s judicial committee concluded that over 18,000 incidents of major crime were documented. Additionally, over a thousand Hindu women were subjected to rape, as reported by Sunday Guardian Live.

Five years later, in 2016, Jogeshwar Roy, a 55-year-old Hindu priest was beheaded by Islamic militants in the northern part of the country. The attack was claimed by the Islamic State, which as per the Bangladeshi administration is non-existent in the country. Later BBC reported that ISIS soldiers used ‘light weapons’ for the killing.

Notably, Hindus are not the only community being targeted in Bangladesh. In October 2015, Kunio Hoshi, a 66-year-old Japanese man was shot thrice in his head in the remote village of Rangpur. According to various media outlets, Hoshi had migrated to Bangladesh to make money and improve his living conditions. Just a year later, Maung Shue U Chak, a 75-year-old Buddhist monk as killed in the Bandarban district. ISIS claimed responsibility for both the attacks. Additionally, many LGBTQ rights activists have been hacked to death including Xulhaz Mannan- editor of Bangladesh’s first LGBTQ themed magazine- and Mahbub Rabbi Tonoy- a popular activist.

The conspiracy against Bangla Hindus