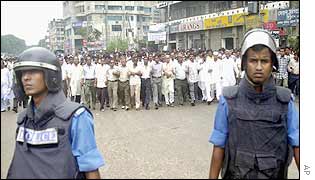 The BBC’s Waliur Rahman reports from DhakaLeaders of the minority Hindu community in Bangladesh have met the country’s president and asked him to ensure the safety of the country’s minorities.

The meeting followed reports in the Bangladesh media of an increase in attacks on Hindus since the victory of the Bangladesh Nationalist Party-led coalition in last week’s general elections.

The European Union has also raised concerns over the reports.

The minorities are widely considered to be supporters of the rival Awami League party which was defeated in the polls.

The Hindu leaders said they feared they might not be able to celebrate the forthcoming Hindu festival of Durga Puja beginning later this month.

President Shahabuddin Ahmed said the government would take necessary action to ensure the safety of the minorities.

Earlier, similar concerns were raised by the European Union envoy to Dhaka, Antonio de Souza Menezes, who said he has received complaints of violence against the minorities.

Mr Menezes said many non-governmental organisations have contacted his office and expressed concern at the level of violence against the minorities.

He said he has discussed the issue with the Bangladesh Nationalist Party, whose leader Khaleda Zia, was sworn-in as the country’s new prime minister on Wednesday.

Want to join me in making a difference? We are raising money to provide legal support to… Dhiman Chowdhury needs your support for Legal Assistance to Victims
View on Facebook
· Share

“The Islamists who supported Pakistan in 1971 target Hindus today. We appeal to the conscientious thought leaders & decision makers working for @POTUS? What will it take for the religious minorities…
View on Facebook
· Share