Courtesy: The Guardian. This news is collected unabridged from The Guardian newspaper and furnished here unabridged. The collection here in this page is for easier access by the viewers and as such it doesnot violates copyright laws and used only as an alternative to url redirect. For original news, please visit: https://www.theguardian.com/world/2021/oct/16/four-die-after-violence-erupts-at-hindu-festival-in-bangladesh . 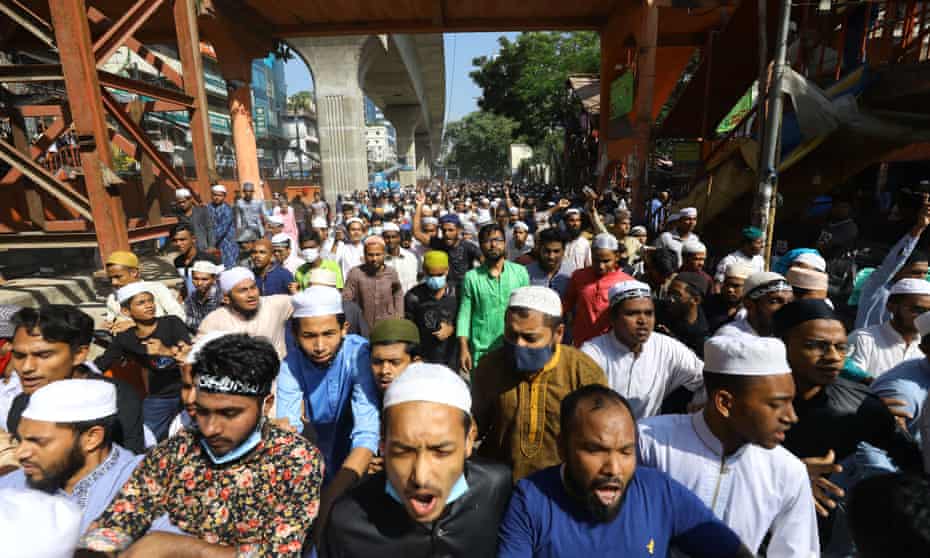 Demonstrators take to the streets in Dhaka after allegations of the desecration of an Islamic holy book in the city of Cumilla swept Bangladesh. Photograph: Harun-Or-Rashid/Eyepix Group/Rex/Shutterstock.

Deadly communal violence has broken out in Bangladesh after allegations of the desecration of an Islamic holy book led to dozens of Hindu temples being attacked and police opening fire on a crowd. At least seven people died in the disturbances.

The government deployed paramilitary troops to 22 districts after religious tensions and violence broke out in the city of Cumilla on Wednesday, resulting in the deaths of four Muslims after police fired into crowds.

On Friday and Saturday, further communal violence erupted in the capital, Dhaka, as well as in the southern town of Begumganj. One Muslim and two Hindus died in these incidents, one from stab wounds.

The trouble was sparked by videos and allegations that spread across social media that a Qur’an, the Muslim holy book, had been placed on the knee of a statue of the Hindu god Hanuman, in a shrine set up for the Hindu holy festival of Durga Puja.

After the video went viral on Facebook earlier this week, mobs of more than 500 people gathered in Cumilla and neighbouring districts over the alleged blasphemy. About 10 Hindu temples and shrines were attacked and vandalised by the crowds, who threw stones and smashed statues of the Hindu gods.

In Cumilla, police shot teargas and fired on the crowds. Dozens were injured, including several police officers.

The anti-Hindu violence continued into Friday and Saturday. More than 80 special shrines set up for the Durga Puja festival were attacked, with about 150 Hindus injured and two killed.

On Friday the prime minister, Sheikh Hasina, promised severe action in response. “The incidents in Cumilla are being thoroughly investigated,” said Hasina. “Nobody will be spared. It doesn’t matter which religion they belong to. They will be hunted down and punished.”

Md Faridul Haque Khan, the state minister for religious affairs, said the incident involving the Qur’an would be investigated but added that communal harmony should be protected and urged people not to take the law into their own hands.

Obaidul Quader, a minister with the ruling Awami League government, visited a Hindu shrine in the aftermath of the violence. He said “fanatic elements” were responsible for the attacks on the Hindu festival, adding that the government would “not let them proceed with their evil design”.

Hindu religious leaders alleged the attacks were part of a conspiracy to attack their community. Hindus make up 10% of the Muslim-majority country.

In August, four Hindu temples were attacked in the country’s Khulna district and in March, during a visit by the Indian prime minister, Narendra Modi, hardline Islamist groups attacked Hindu shrines.

On Thursday, the Indian government spokesperson, Arindam Bagchi, described the incident as “disturbing” and said officials were in communication with the Bangladesh authorities about the attacks.

Bangladesh Communal Violence Not New, Over 3600 Incidents Targeting Hindus Since 2013